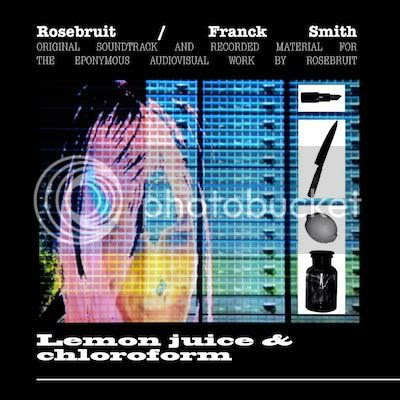 Text: "Let us assume that there is a substantial difference between lemon juice and chloroform. That was to be expected and — need it be said that? — there is significant differences, among other things, between think tank and myself. There's reason to believe that chloroform and lemon juice are as necessary as coma for extrasensory perception. In a manner of speaking: breathing a so called toxic substance, such as chloroform, could increase — by combination of circumstances — creative activities in order to gradually create new physical and intellectual abilities such as ubiquity and prophecy. Consequently: a thirst-quenching liquid like lemon juice and an anesthetic like chloroform are not only different products but also the prerequisite to metaphysical introitus."

Rosebruit / Franck Smith - Lemon juice & chloroform
(Original soundtrack and recorded material for the eponymous audiovisual work by Rosebruit)
Music and text composed, written & performed by Franck Smith
Recorded in November 2010  © Franck Smith
Version for free-download - No commercial usings can be made from this recording.